a)      “Education is the manifestation of perfection already in man.” Who said this?

c)       Extrovertism is the characteristic of infancy period. [Write True or False]

d)      In which year was the University Grants Commission constituted?

e)      Education has no relation to Biology. [Write True or False]

g)      Johann Herbart is considered as the father of Educational psychology. [Fill in the blank]

i)        Name the famous educationist who laid stress on the training of sense organ for child education.

j)        Who claimed for compulsory primary education during the British rule in India?

k)      Emotion is an agitated state of mind. [Write True or False]

j)        Write two provisions of Article 45 of the Indian Constitution. 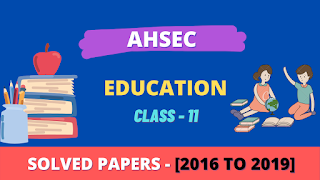 a)      What do you mean by vocational aim of education?

e)      Mention four challenges before the teachers in the context of new social background.

f)       Briefly discuss the role of parents and teachers in habit formation.

i)        Give the concept of child psychology and developmental psychology as two important branches of psychology.

4. What do you mean by social aim of education? Mention three points of differences between social and

Write a short note on the contribution of Christian Missionaries towards the development of education and literature in Assam.