The figures in the margin indicate full marks for the questions. The candidates are required to write the answers in their own words as far as practicable.

6. "And then Swami gave a lurid account of Samuel's Violence.”

10. Choose the meaning of the words in italics in the following sentences from the alternatives given in brackets:  1/2x4=2

(iii) All that would not be in keeping with our family tradition. (Practice / Custom / Old things)

(iv) I am dazed and know not what to do. (puzzled / shocked / confused)

(i) Mavji Dave was a Modh Bania.

(iii) Mavji was a young barrister.

12. Read the following extract carefully and answer the questions that follow:

Of course, an ant's cow is not like a real cow. The ant's cows are greenflies or aphides such as are found on rose trees in the garden. The milk of these tiny creatures is honey-dew, and an ant at work on a greenfly will stroke it with its antennae, first on one side, then on the other, until the drops of honey are exuded through two pores in the back of the greenfly and carried away by the ant.

19. Fill in the blanks with the appropriate word from among those given in brackets:  1+1=2

(i) The friends so — together. (played, linked, lived)

22. Choose the right determiners from those given in brackets and fill in the blanks:  12x4=2

23. Use correct tense forms of the verbs given in brackets in the following:  1x2= 2

(b) Mira said that her mother had been suffering from fever.

26. Correct the errors in the following sentences: (any three) 1x3=3

(a) Money isn't the solution for every problem.

(b) This hotel provides fooding and lodging.

(d) She came back with bag and baggage.

27. Combine each of the following pairs of sentences into a single sentence: 1+1=2

(a) I have some duties. I must perform them.

(b) This is my friend. His name is John.

28. Make sentences to show the use of any two of the following phrases: 1+1=2

null and void, by dint of, with flying colours, all in all.

30. Translate any one group of the following into English: 1x6=6 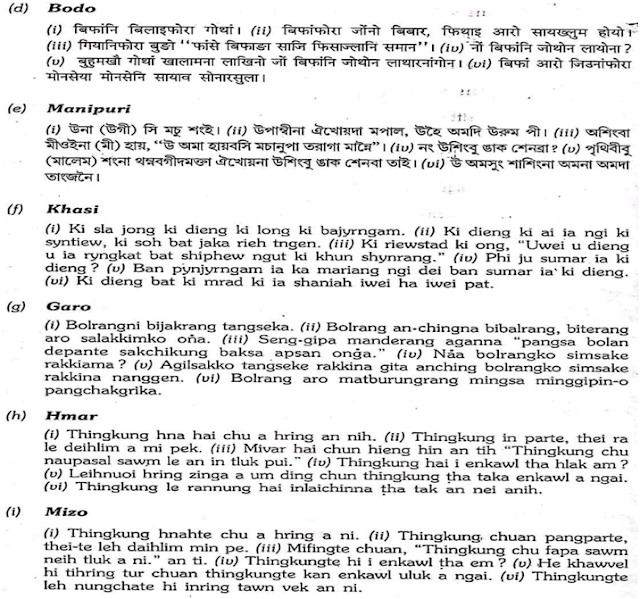 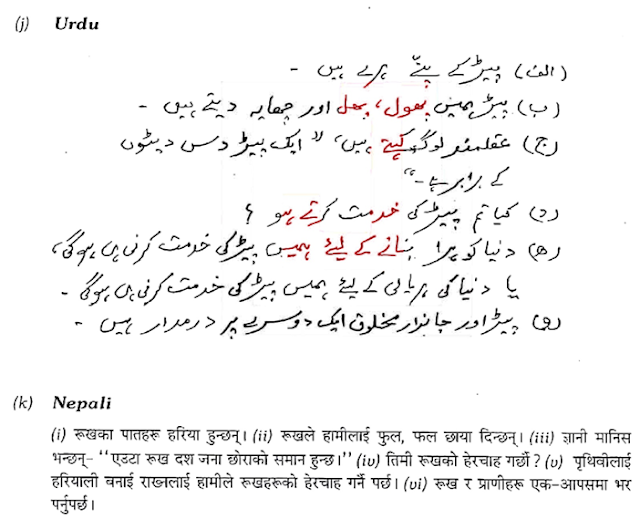 (a) The great advantage of early rising is the good start it gives us in our day's work. The early riser does a large amount of hard work before others get up. In the early morning the mind remains fresh, and there are few sounds or other distractions, so that the work done at that time is generally well done. In many cases the early riser also finds time to take some exercise in the fresh morning air, and such exercise supplies him with a lot of energy that lasts till evening. By beginning the day so early, he knows that he has plenty of time to do thoroughly all the works he can be expected to do, and is not tempted to hurry on any part of it. All his work being finished in good time, he has a long interval of rest in the evening before he goes to bed.

(b) I wandered lonely as a cloud

That floats on high over vales and hills,

When all at once I saw a crowd,

A host of golden daffodils,

Beside the lake, beneath the trees,

Fluttering and dancing in the breeze.

Continuous as the stars that shine

And twinkle on the Milky Way,

They stretched in never-ending line

Along the margin of a bay;

Ten thousand saw I at a glance

Tossing their heads in sprightly dance.

(Outline: A king distressed — his people lazy — wanted to teach them a lesson -- put a big stone in the middle of the road — people went around the stone, blamed the government for not removing it — king had it removed — beneath it was an iron box marked "For the man who removes the stone" — inside a purse full of money — the people were ashamed.) -

(b) Prepare a newspaper report using the information given below. Do not add any new information.

5. What sign did Hauchecome make to indicate that he was telling the truth? 2

8. Choose the meaning of the words in italics in the following sentences from the alternatives given in the brackets:          1/2x4=2

(a) There are genuine mysteries in the world that mark the limits of human. knowing and thinking. ( real / mind / horrible)

(b) He made a powerful, dignified speech answering every question. (humourous / respectable / rude)

9. (a) What things were being sold in the market at Goderville? Write in brief the behaviour of the buyers and sellers.  2+3=5

(b). Read the passage and answer the questions that follow:

Hauchecome, a peasant who had just arrived at Goderville, was directing his steps toward the public square when he noticed on the ground a little piece of string. Hauchecome, economical like a true Norman, thought that everything useful ought to be picked up. He bent painfully, for he suffered from rheumatism, and took the piece of string from the ground.

10. (a) "The stone-cutter's son was becoming well known as a teacher. He used to wander about the roads or stand in the market place all day long and talk to anyone who cared to greet him."

(b) “This seemed to some people a new and wicked idea. He said that there were higher and nobler deeds than making sacrifices to Athene and the other Gods of Greece."

(i) The budding twigs spread out their fan ... (flowers / small branches / little birds)

(a) The son told his father that he wanted that box.

(a) A hunter shot the tiger.

(b) The gate was opened by the peon.

(a) These mangoes are ripe almost.

(b) Some one should look at the matter.

(c) He wanted neither food nor money.

(d) They have some furniture’s.

(e) She prefers tea than coffee.

(f) She was sitting besides her friend.

(a) He is intelligent. He is strong.

bag and baggage, look into, in spite of, put up. 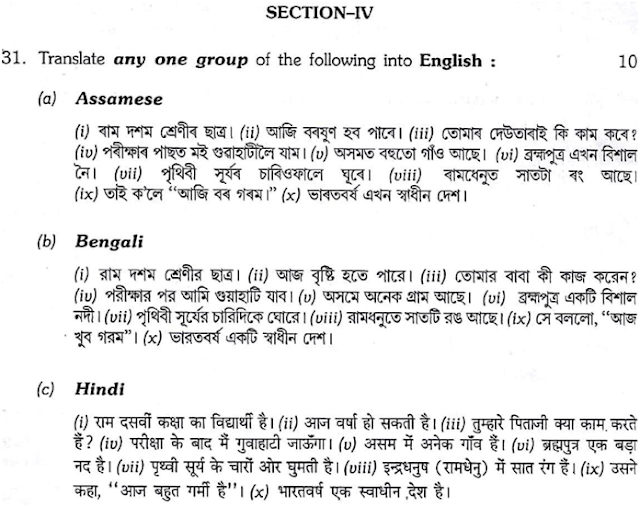 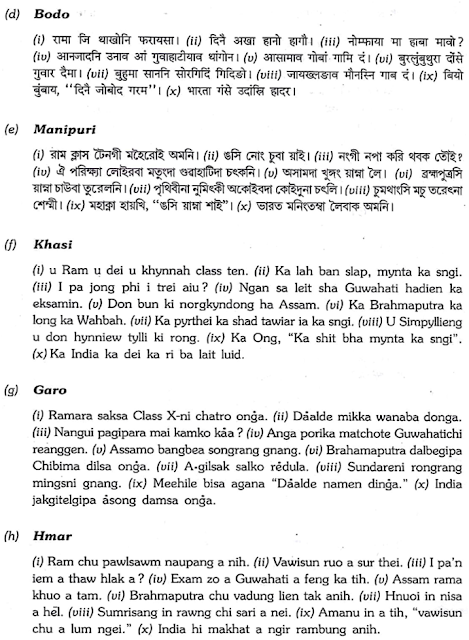 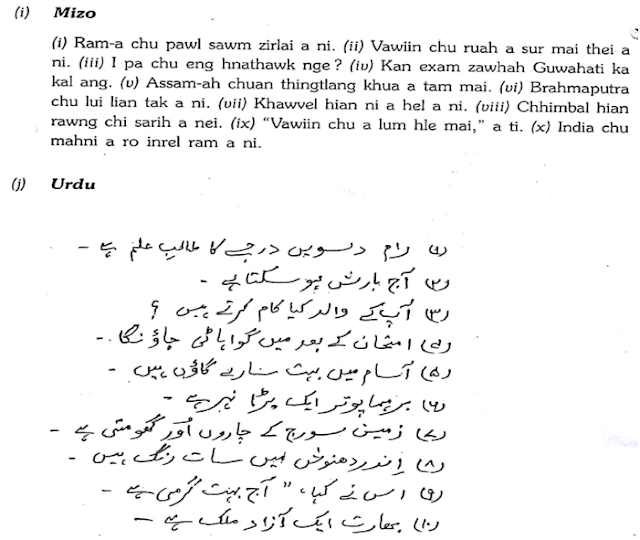